The Bambino and Me - an audiobook review 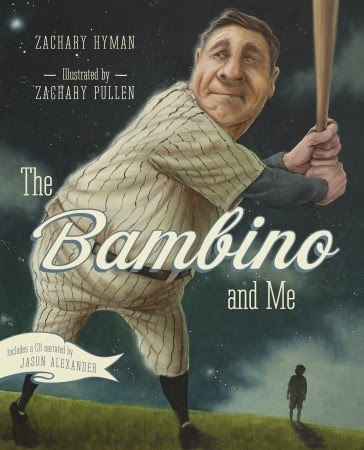 Huge baseball fan, Jason Alexander (of Seinfeld fame), reads this fictional memoir of 10-yr-old Yankee fan,George Henry Alexander, in The Bambino and Me. The story simply begs to be read by Jason Alexander who certainly needs no accent coaching to create this believable boy from the Bronx in the summer of 1927.

Babe Ruth has been sold to the Yankees and George is his biggest fan.  When he gets a ticket to a Yankees/Red Sox game for his birthday, he couldn't be more excited! But then comes the error - his Uncle Alvin has given him a Red Sox jersey to wear to the game! His mother insists that he wear it. Enemy colors! What could be worse?

The audio version is filled with the wonderful sounds of baseball and summer - jazz music, the chatter of kids on the street, the crack of a bat, the roar of a crowd. If this audio book were a baseball game, it would be a perfect one.

Recommended for ages 6-9, and unabashed lovers of America's Pastime.

This is "hands-down" the best audio book that I've listened to since Three Times Lucky.


"And they'll watch the game and it'll be as if they dipped themselves in magic waters. The memories will be so thick they'll have to brush them away from their faces."

Note:
Although it looks wonderful, I can't offer comment on the printed version of The Bambino and Me. I picked up the CD at ALA Midwinter in Philadelphia, and asked if I could have the accompanying book. I was told that I could only have the CD, which I tossed in my bag where it sat unnoticed and unremembered until this week when I had a lull between audio book reviewing assignments. I'm so glad I remembered it!