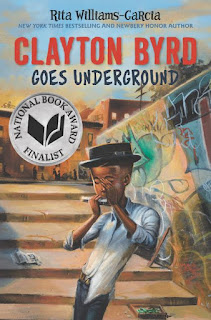 Cool Papa Byrd was Clayton's grandfather, his best friend, his musical muse, and the coolest electric blues guitar player in Washington Square Park.  Without him, Clayton was a discordant jumble of sorrow and loneliness.

"Everyone saw Clayton leave the school with his mother.  Some had even laughed at him and teased him about the whipping he had coming.

Clayton's mother scolded from the time they left the school to the time she drove home to the time they got in the house.  Even when she wasn't out-and-out scolding, she spoke in scolding tones, In you-know-betters, what's-gotten-into-yous.  She said over and over, 'Your grandfather's passing is no excuse for this behavior.'

Clayton remained silent through the scolding. He couldn't tell her what was wrong even if he wanted to. He didn't understand it all himself. Even if he could tell her, she would only blame Cool Papa, and Clayton was tired of her being angry at the person he loved the most. He said nothing.'

Clayton Byrd Goes Underground is Clayton's journey through the blues.  Rita Williams-Garcia infuses this story of family grief, anger, and reconciliation with the bluesy notes of Clayton's harmonica, the smooth sounds of Cool Papa Byrd and his group, the Bluesmen, and a ragtag band of hip-hop street performers who ply their trade in New York's subway system.  No slow-starter here—Clayton Byrd Goes Underground grabs the reader from the pickup note.

I read this in one sitting.  Because of its brevity and musical connection, this would be a perfect middle-grade book for an in-school project collaboration between music and language arts teachers.  Queue some blues on your favorite music streaming service and get yourself in the mood for this award-winning book.

Note: If you want to hear some awesome blues harp, listen to the Led Zeppelin version of "When the Levee Breaks." (originally recorded in 1929 by Kansas Joe McCoy and Memphis Minnie)
- December 19, 2017