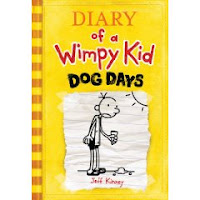 Kinney, Jeff. 2009. Diary of a Wimpy Kid: Dog Days. New York: Amulet.
It's Dog Days as in the dog days of summer (the timing of this book's release could have been better) and Greg Heffley is looking forward to some quality indoor time, but unfortunately, his Mom's idea of the perfect summer vacation does not include horror movies, video games and TV. In Dog Days, Greg woefully recounts his misadventures at Rowley's country club, the public pool, his summer job, and the cabin at the beach. Rodrick, Manny, Gramma, Mom, Dad, the Jeffersons, and Fregley, all make appearances in this latest installment of the Wimpy Kid series. However, the true stars of Dog Days are Greg and his Dad, who learn that father-son bonding may not be the same in every family. Sometimes hating the same comic strip is all that you need.
Dog Days may not have as many "laugh out loud" moments as earlier installments, (Rodrick Rules is still my favorite) but it remains comic genius, hilarious sketches seamlessly integrated into the story, often acting as the "punchline" in place of words.
Usually, I can relate to Mrs. Heffley. In Dog Days, I completely empathize with Greg. As a child, I also dreaded the trip to the "public pool," although my experiences (thankfully) were not the same as Greg's,
"I didn't want Manny to have to walk through the shower area and see the things I've seen. So I got a towel out of my bag and was gonna put it over Manny's eyes when we walked past the shower guys. But in the two seconds it took me to get my towel, Manny was gone. And you'll never believe where he went."
You'll have to imagine the sketch of the diminutive Manny, whistling and washing in the men's shower, surrounded by hairy knees and ankles!

"I knew I had to rescue Manny, so I closed my eyes as tight as I could and went in to save him... When we got to the other side, Manny seemed fine, but I don't think I'll ever totally recover from that experience."

And although I never watched a movie with "the muddy hand," I do remember one with a charred, black hand, and can completely relate with Greg's feelings in this passage,
"My new fear is that the hand is gonna crawl up on my bed and get me in my sleep. So lately I've been covering my whole body with the blanket and leaving a hole so I can breathe. But that strategy his its OWN risks. Rodrick got into my room today, and I had to spend the morning trying to wash the taste of a dirty sock out of my mouth."
And finally, I have to agree with Greg on this one,
"There's this comic about a dog called "Precious Poochie," and it's been running for about fifty years. The guy who wrote it died a long time ago, but they're still recycling his old comics. I don't know if they're funny or not because, to be honest with you, most of them don't even make sense to a person my age."
Well, Jeff Kinney does make sense to a person of Greg Heffley's age! In fact, based on the phenomenal interest in his books, he makes sense to kids of all ages - from 9 to 99.
Check out The Diary of a Wimpy Kid website for the Dog Days Event Kit.
- October 19, 2009