This book debuted in April 2010 to well-earned, rave reviews. In sparse verse, author Jame Richards, tells a story of devoted high society sisters, Celestia and Estrella, Whitcomb, their coldly calculating, businessman father, a miner's son, Peter, Maura, the wife of a Pennsylvania railroad engineer, and Kate, an obsessive-compulsive young widow struggling to find a purpose in life. Their lives become intertwined due to the tragically preventable Johnstown, Pennsylvania flood of 1889. Chapters of free-form verse alternate between the voices of the six characters.  An author's note separates the facts of the actual flood from the story. More than 2200 people died in the flood, including entire families.

The Johnstown Flood is the backdrop, but Three Rivers Rising is foremost a story of society, class, and first (or forbidden) love.
Highly recommended for grades 8 and up.


A reader's guide is available for teachers, librarians and book clubs.

The aftermath of the Johnstown Flood. 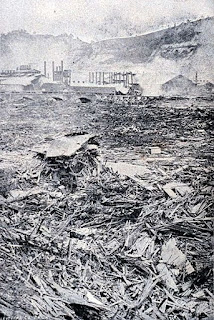 (Photograph from Wikimedia Commons, originally taken by an employee of the National Oceanic and Atmospheric Administration.)
Information about the flood and its victims is available from the Johnstown Area Heritage Association.
- July 25, 2010