The Witches - an audiobook review 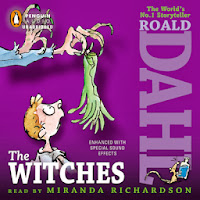 I recently reviewed a new audiobook copy of Roald Dahl's, The Witches. The main characters are the grandson, Grandmamma and the Grand High Witch.  Imagine trying to narrate The Witches while adhering to Roald Dahl's detailed description of the witch's voice,

"You may rrree-moof your gloves!" she shouted. Her voice, I noticed, had that same hard metallic quality as the voice of the witch I had met under the conker tree, only it was far louder and much much harsher. It rasped. It grated. It snarled. It scraped. It shrieked. And it growled.  ...

"You may rrree-moof your vigs!" snarled The Grand
High Witch. She had a peculiar way of speaking. There
was some sort of a foreign accent there, something
harsh and guttural, and she seemed to have trouble
pronouncing the letter w. As well as that, she did
something funny with the letter r. She would roll it round
and round her mouth like a piece of hot pork-crackling
before spitting it out. "


Such is the task for reader, Miranda Richardson, who does a superb job.  Below is my review (reprinted with permission) as it appeared on the AudioFile Magazine website:

Actress Miranda Richardson narrates the story of an orphan boy who learns about witches from his grandmamma, then accidentally stumbles upon their annual meeting--with disastrous consequences involving a "Formula 86 Delayed Action Mouse-Maker." Richardson is tremendous as the Norwegian grandmother, her young English grandson, and the terrifying Grand High Witch. She switches seamlessly between accents and the voice of the witch, whose peculiar manner of speech is described by Dahl in great detail. The story is punctuated judiciously with sound effects. The rattling of chains fastening doors, the tinkling of a dropped bottle, the skittering of mice, and the screaming of frightened hotel guests are just a few examples of sounds that add energy and excitement to this classic tale of scary fun. L.T.