A Long Walk to Water - an audiobook review 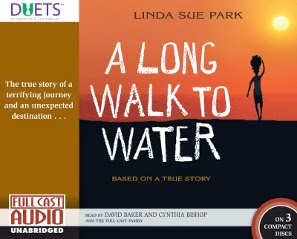 
In an interview, author Linda Sue Park says that this was an easy book to write because she let Salva's story speak for itself.  Linda Sue Park gave Salva's powerful story a voice. Brief and straightforward, A Long Walk to Water is inspiring for its truth and simplicity.  Park eschews sentimentalism and allows Salva's understated dignity, perseverance and virtue to awe the reader.  No embellishment is necessary. This is a compelling story.  Highly recommended.

Recently, I was offered the opportunity to review the new audiobook version of A Long Walk to Water.  It was my pleasure. Following is my starred review of the audiobook as it appeared in the January, 2014, edition of School Library Journal.

Gr 5–9 -- Differentiated, African-inspired chapter introduction music assists in delivering this parallel story of two very different, but equally difficult, lives in Sudan. The story alternates between Nya, a composite character based on the lives of real girls, in 2008, and Salva, a young boy in the war-torn Sudan of 1985. Nya's life consists of the grueling and monotonous task of hauling water. All day, every day, her task is finding, acquiring, and transporting brown, dirty water to meet her family's needs. Salva's story unfolds in the midst of a horrific civil war. Separated from everything and everyone he knows, he spends more than 15 years walking across Sudan, Ethiopia, and Kenya, living in refugee camps, and struggling to survive. His is a true story based on the experiences of one of the "lost boys of Sudan." An echo effect is used to highlight the nagging questions that are always in the forefront of Salva's mind, "When will I see my family again?" and "What will become of me?" Readers David Baker and Cynthia Bishop worked with a dialect coach to ensure authenticity in pronunciation and accents. An update on Salva's ongoing project follows the story. Listeners will not ever leave the tap water running without thinking of this powerful story.

It is heartbreaking to think that the tribal violence between the Dinka and Nuer that precipitated Salva's tortuous years of exile back in 1983, has erupted again in South Sudan, the world's newest country.
- January 13, 2014