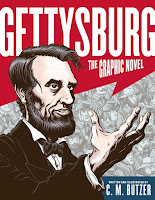 In black, white, and subtle hues of Union blue and Confederate gray, first-time author, C.M. Butzer, tells the story of the Battle of Gettysburg and its aftermath in graphic novel format.

The story begins with a double-spread map of Gettysburg, 1863, then continues with cameo "photos" of the main historical figures (both military and civilian), and background information presented as a two-page letter written with quill pen and ink. The remainder of the story is told in mostly multi-panel pages (some wordless), with particular emphasis on the Gettysburg address, included in its entirety, each phrase accompanied by a panel depicting pivotal moments of both past and recent history, alluding to the timeless nature of Lincoln's most famous words.

Although the cover art did not initially appeal to me, I picked this book up because of my interest in history and the fact that local students in my area often take class trips to Gettysburg. I began the book without much enthusiasm and questioned the effectiveness of some of the book's early dialogue. It was not until I reached the account of photographer Timothy O'Sullivan's arrival at the bloody battlefield, that I realized the great effort that author C.M. Butzer, had made to maintain historical accuracy. The panels depicting dead soldiers on the field, are dutiful replicas of actual photographs which I recall viewing at Gettysburg National Military Park. The dialogue which I had questioned as stilted, was an actual conversation as record by a contemporary of General Buford. As mentioned, the Author's Notes are a page-by-page resource of historical background.

Gettysburg: The Graphic Novel offers more than historical accuracy. It gives the reader a balance of both war and peace. There is much more to Gettysburg than the battle. There is the story of the town's civilians, the political drama, the humanitarian concerns, the creation of the site of what was then called, The Soldiers National Cemetery, and of course, the far-reaching impact of President Lincoln's address to the thousands gathered at the newly created national monument.

Sample pages from the book may be found on the author's blog http://cmbutzer.blogspot.com/2009/01/gettysburg-page-samples.html

Hopefully, teachers will embrace the non-fiction, graphic novel genre as a tool for reaching those students who shun history as boring or irrelevant.

There is great depth to this slim, 80-page volume.